Attractiveness of Japan for the development of franchise business

Japan has one of the most powerful economies in the world due to high achievements in the technological sector. The population is 127.25 million people and more than half of them live in urban areas. The main cities, such as Tokyo (9.27 mln), Yokohama (3.72 mln), Osaka (2.69 mln), Nagoya (2.3 mln), and Sapporo (1.95 mln) are available for different franchise opportunities. The household net-adjusted disposable income per capita is $27,323.

A fun fact about starting a franchise in Japan is that franchisors hit the capital first. There is a belief that if you have managed to establish a business in Tokyo, you can do it anywhere in Japan. There are also no special franchise laws that limit franchise activities.

A good benefit for owning a franchise in Japan is certainly the workforce. Japanese work 48 hours a week without overtime pay and are very qualified, responsible and committed to their jobs.

With 1,305 franchise types and the annual turnover of $198 billion, Japan franchise business ranks the second largest in the world. 260,992 chain stores and outlets are selling goods and services in the country. The main franchise industries are retail, health and fitness, food service sector, care-related businesses and education. The most popular type of Japanese franchising is convenience stores; they generate 42.7% of the total turnover.

Looking at the franchise market share one can see that the USA and UK are highly represented by their brands in Japan, there are also franchise outlets from China, Singapore, Malaysia, Australia, etc.

Initial franchise fee constitutes something average between $20,000 and $50,000.

There are high investment business opportunities, as well as cheap franchises in Japan presented for review, the choice is yours. 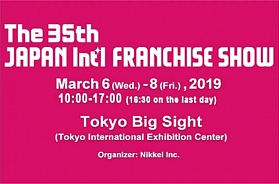